In Munich today, I met Martin Kalunga-Banda (next to me, in the photo below). We immediately felt like kindred brothers.  After he learned about ServiceSpace, he said he couldn’t sleep that night as he emailed his family and friend about how Karma Kitchen could work in Zambia. 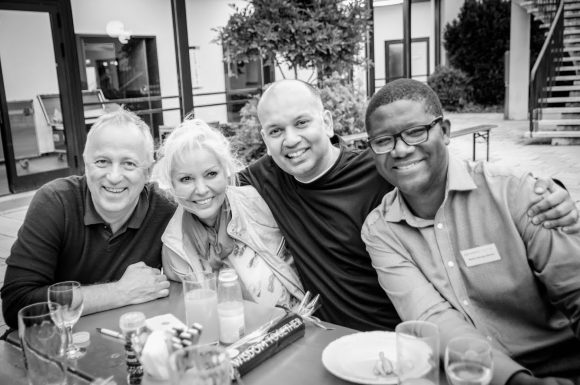 His humble demeanor and generous spirit immediately caught my attention, and while I didn’t know much about him, I knew there had to be a story.  And there certainly was — an amazing story of love’s unexplicable ways.

One fine day, Martin feels called to cold call the President of Zambia. «Can I speak to the president?» he asks.  «Do you have an appointment?» «No.» «Please hold.» Elevator music. For a long time.

Someone else picks up. «Um, hello, I’m trying to get to the president please.» More elevator music.

Third person picks up, and he figures he should be a bit more aggressive. «Look, I’ve been waiting a long time and I really want to speak to the president.» Voice on the other side says, «President speaking.»

That then led to a remarkable series of ripples, and Martin actually became the president’s Chief of Staff for 2 years!  And Martin being Martin, he implemented a rule that a president couldn’t make a policy without actually having hands-on experience with the matter — visiting at least three NGOs doing farming work, for instance, before changing farmer laws.

If you ask Martin, he’d say that he doesn’t exactly know how he became chief of staff. But knowing is not all that it’s made out to be. Love is an emergent phenomena. «Our body is the apparatus to tune into that signal,» he says. «And once we tune it, we simply act in an instant.»

Nelson Mandela, one of Martin’s heroes, operated this way. For Mandela, everyone mattered. He knew that everyone was connected to field of consciousness.

«It so happened that Mandela’s foundation applied for a grant. Of course, we can’t just send him a letter — so we invited him for a breakfast meeting. My colleague Peter picked him and brought him to breakfast. Right as they sat down, Mandela asks, ‘Peter, weren’t there two of you?’ ‘No, Sir, just me.’ ‘Let me get him,’ Mandela gently said. He then proceeded to bring the driver to breakfast!»

Una respuesta a “Martin In Munich: Everyone Matters”